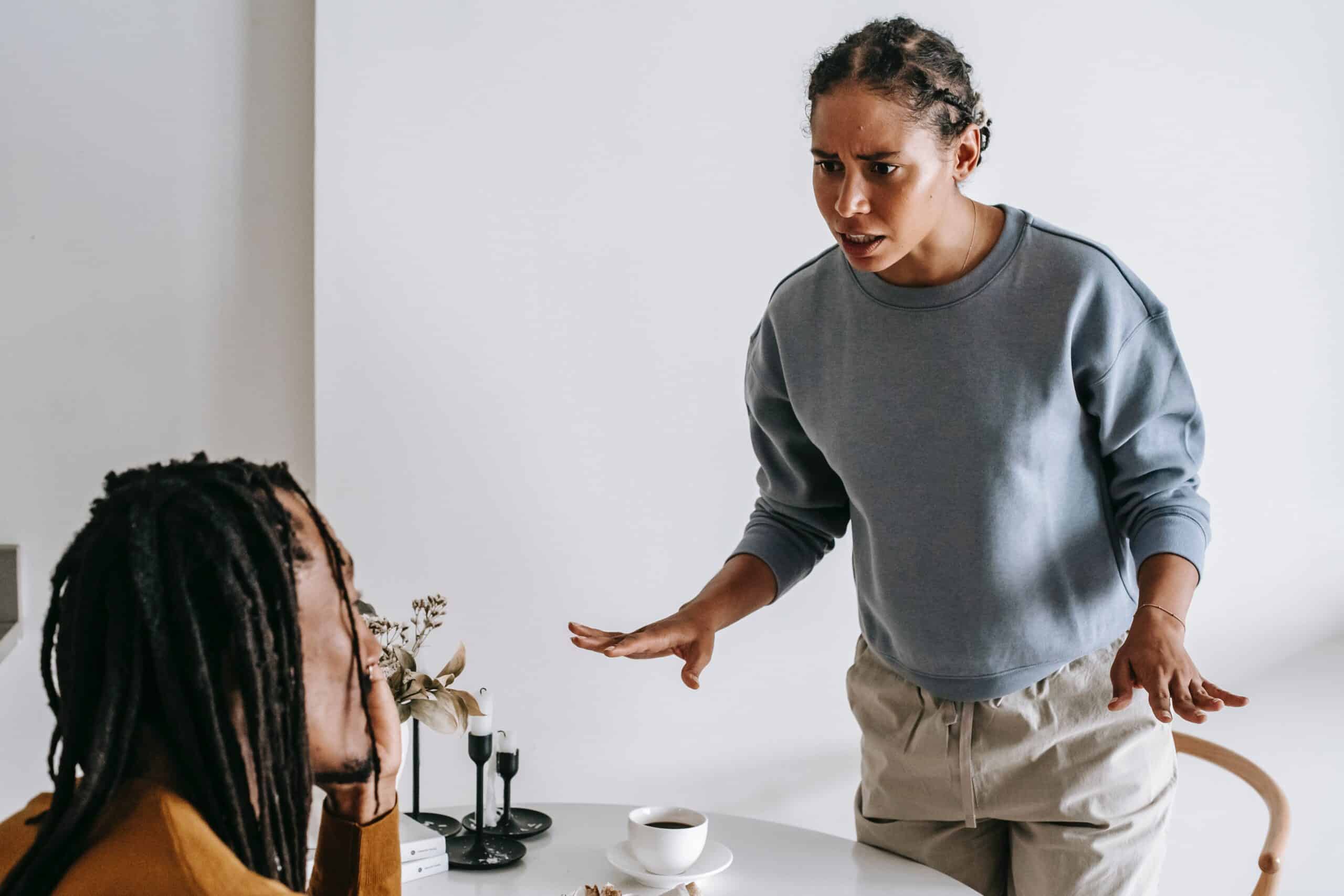 When you think of an abusive relationship or an abusive marriage, do you immediately think of the perpetrator being the man and the victim being the woman? Most people automatically answer “yes” to that question especially when it’s around physical abuse. Intimate partner violence (IPV) is considered a human rights violation and public health issue throughout the world, with psychological aggression, in some research reported by 48.4% of women and 48.8% of men.

The vast majority of abuse reported in the mainstream media is focused on the man being the perpetrator, so it’s easy to forget that abuse happens to men and women by men towards women AND women towards men.

The unfortunate turn of events in Johnny Depp’s life recently shocked the world when The Sun newspaper accused him of being a “wife beater.” While we all know now that it wasn’t a healthy relationship, when asked, the majority of people had already assumed he had physically and emotionally abused his wife.

It seems that the old premise, “innocent until proven guilty,” doesn’t apply when there’s a good headline that will sell more newspapers.

So if there’s no correct premise to presume abuse only happens one way in relationships, and proof must be provided before fault is assumed, how do you know if you’re suffering some form of abuse in your marriage?

Male Victims of Domestic Violence: The Facts and Figures

According to statistics from the Mankind Initiative, 11% of men (7.2% women) have thought about killing themselves because of abuse from their romantic partner. In the recent study by Mecklenburg–Western Pomerania, it showed that many of the emotionally abused men suffered from unreported cases.

Many women don’t report the abuse they have experienced because they feel afraid and ashamed. For men it seems this is even more common, and is due to a lack of men they trust to talk to about it as well as not knowing how to deal with the shame and being afraid to be seen as weak.

The Austin Institute for the Study of Family and Culture, used data from 4,000 divorced adults, and found that one of the main reasons married couples divorce is physical and emotional abuse.

There is no denying that society nearly always automatically considers the man as the abuser without requiring the proper evidence and facts first.

1. An abusive relationship includes being belittled, humiliated or called names

In a long term relationship, it can be difficult to know the signs of manipulative behavior or the signs of emotional abuse. It’s confusing to define whether this is just an argument, some playful banter or something more sinister.

If you’ve ever felt ashamed in front of your friends and family and the source of your sense of shame is how your wife is acting towards you or how they are talking about you, then you may well be experiencing abusive behaviour from her.

Do you ever hide away and avoid going places with or avoid just being around your wife?

Do you ever feel afraid to say what you think or feel?

Again these are signs that you may be in a relationship where there is some form of abuse happening.

We all deserve to be treated with respect and consideration, yet it’s so difficult to feel confident and valuable enough to face up to someone, who is acting with hostility toward you, and then be able to tell them what will happen if they continue to treat you in this way.

2. Possessive, Jealous, and Harassing with Accusations of Infidelity

Cheating or infidelity is one of the leading causes of divorce but sometimes the accusations are coming from a place of fear and insecurity without factual evidence.

It’s common for people to “presume” someone is cheating as soon as there’s some change in behavior, but there may be a good reason for the change that has nothing to do with anyone outside the marriage.

Sometimes you may be the one being accused of infidelity, being called names, having restrictions placed on how you live your life to accommodate the other person’s insecurity.

Only you can tell whether there is some validity to the accusations, but if you’re completely clear that you are being loyal and honest, then don’t be afraid of calmly telling your partner that their lack of trust is unfounded and damaging, but do try to get to a point of understanding WHY they don’t trust you.

If you’re in a marriage where your wife is no longer doing things that foster the care and connection between you, then don’t be afraid to raise your concerns.

Be honest about what you’re feeling without jumping to conclusions about the WHY behind her behavior.

Use “I feel….” statements to explain what you are experiencing and rather than making accusations about her, ask for the truth behind her recent changes.

Yes, being cheated on is a type of abuse which is seriously damaging to the other person’s mental health.

If you don’t feel safe to raise your concerns, invite her to talk with you in front of a therapist or counsellor – someone who can help you both stay calm and express your thoughts and feelings freely without getting drawn into unhealthy arguments.

If you find that any attempt you make to talk about your concerns and your feelings gets shut down or dismissed, you will need to get very clear about what you will and won’t accept as a baseline of consideration and communication in any relationship you commit to – I can help you with this.

It’s difficult for many men to admit that they think they are married to a manipulative woman, or that they are feeling controlled or abused by their wife. There’s a belief in society that to “be a man” you should be solid and unaffected by a woman’s manipulative behavior, emotional demands or accusations.

Does your wife demand all or nearly all of your time to be spent with her?

Does she require that you always check in with her constantly, wherever you are?

Does she expect you to pick up your phone instantly wherever and whenever she calls with no exceptions?

Does she give you the silent treatment when things aren’t going the way she wants them to?

Maybe she has big explosions of emotional outbursts that seem to come from nowhere?

A controlling wife believes she is ALWAYS correct.

If you try to discuss anything with her, does she shut down your opinion and belittle the value you have in the conversation or relationship?

Again, you may need to suggest taking this to a therapist or counsellor if you don’t feel safe to discuss your experience with her, and if the only way forward is one that works for her, not you, then you may need to get very clear about what you’re willing to accept in terms of healthy consideration and communication in any relationship you choose to remain committed to.

4. Threatening to Leave You and Not Let You See Your Children

Another example of a controlling, abusive and manipulative wife is when she uses the threat of leaving the relationship, divorcing and reducing your access to your kids, your family, your home or your finances.

Many times this is a tool used to maintain control and there’s no real intent to follow through on the threats, but it can seriously affect the safety and trust in a marriage and cause the threatened partner to shut down and become locked in a state of fear and anxiety.

Imagine if your friend or child was in your situation and asked you for advice, how would you counsel them to respond to the behavior you’ve experienced?

5. Gaslighting, deflection and making it seem like it’s all in your head

Gaslighting refers to a specific type of manipulation where the abuser is trying to make you question your own reality, your memory or your perceptions.

“Deflection is a common, universal, and unconscious defense mechanism; however, when used excessively, it can blind a person to the information required to be close to others. It acts almost like a force field around a person’s ego, keeping out material that causes tension about who a person is and what he or she believes.” ~ Psychology Today, Erin Leonard, Ph.D

Another way to describe this type of behavior is “blame shifting” – we’ve all done this at one point or another in our lives, mostly as children or when under serious pressure and emotional overwhelm. However, being one of the emotionally abused men in a relationship, this happens consistently and rarely, if ever, does the person take responsibility for their impact on you, the relationship or show a desire to understand your perspective.

If you’ve experienced something like this, you likely feel a very low sense of self worth, self esteem and have little to no motivation and enthusiasm that anything will ever get better.

If you recognise some behavior from your relationship that looks like blame shifting, gaslighting and manipulation, the first thing to do is to stop allowing the other person to dictate how you feel, what you think and how you choose to respond. It’s not easy, but you must learn how to set boundaries and cut the cord to her ability to control you. This is actually the kindest, most loving thing you can do for yourself first and then for the health of the relationship long term.

Remember, you’re not the only one experiencing domestic violence as a man. Men are abused far more frequently than people believe and it happens to every kind of man no matter their age, physical health, occupation, apparent confidence level, or cultural background.

If you think you might be in an abusive relationship, reach out to family and friends, and don’t be afraid to contact some professionals who specialize in working with victims of domestic abuse.

Dealing with difficult emotions is not easy, many of us don’t have good role models around healthy emotional expression and communication, sometimes you may not know what you’re feeling at all because you’ve numbed the emotions and stopped ever trusting anyone and disconnected from your feelings, deciding instead to shut down any part of your vulnerability so others can’t hurt you anymore.. It may take some time to overcome the trauma of an abusive relationship, but it is possible to heal and move on.

Don’t stay in denial, feeling ashamed, or afraid to face the fact that you think your wife is emotionally abusing you. There are many places to turn to for support and guidance from other men who’ve walked through this difficult path before you.

If You Have These Symptoms:

If you recognise any of the symptoms below, it’s important you reach out and get some support: :

Unfortunately one of the most common causes of suicide in men is relationship abuse.

If you feel like you’re stuck in a relationship or life in general, if you feel constantly unheard, disregarded and afraid to be yourself, I can help. Reach out for a free 60 minute coaching call here.

Hi, I'm Dan. I've been a men’s coach for many years, mentoring and coaching men to get clear on what they want and creating practical and actionable plans to make it happen. I’ve experienced many of the same challenges you're going through right now. I’m here to challenge you and help you understand what's holding you back so that you can step into the confident, successful man you were meant to be.

Reach out to me for a free 60 minute consultation.

No Sales Pitch. No Pressure. Enjoy a free coaching session with me. I guarantee you'll feel a whole lot better after.